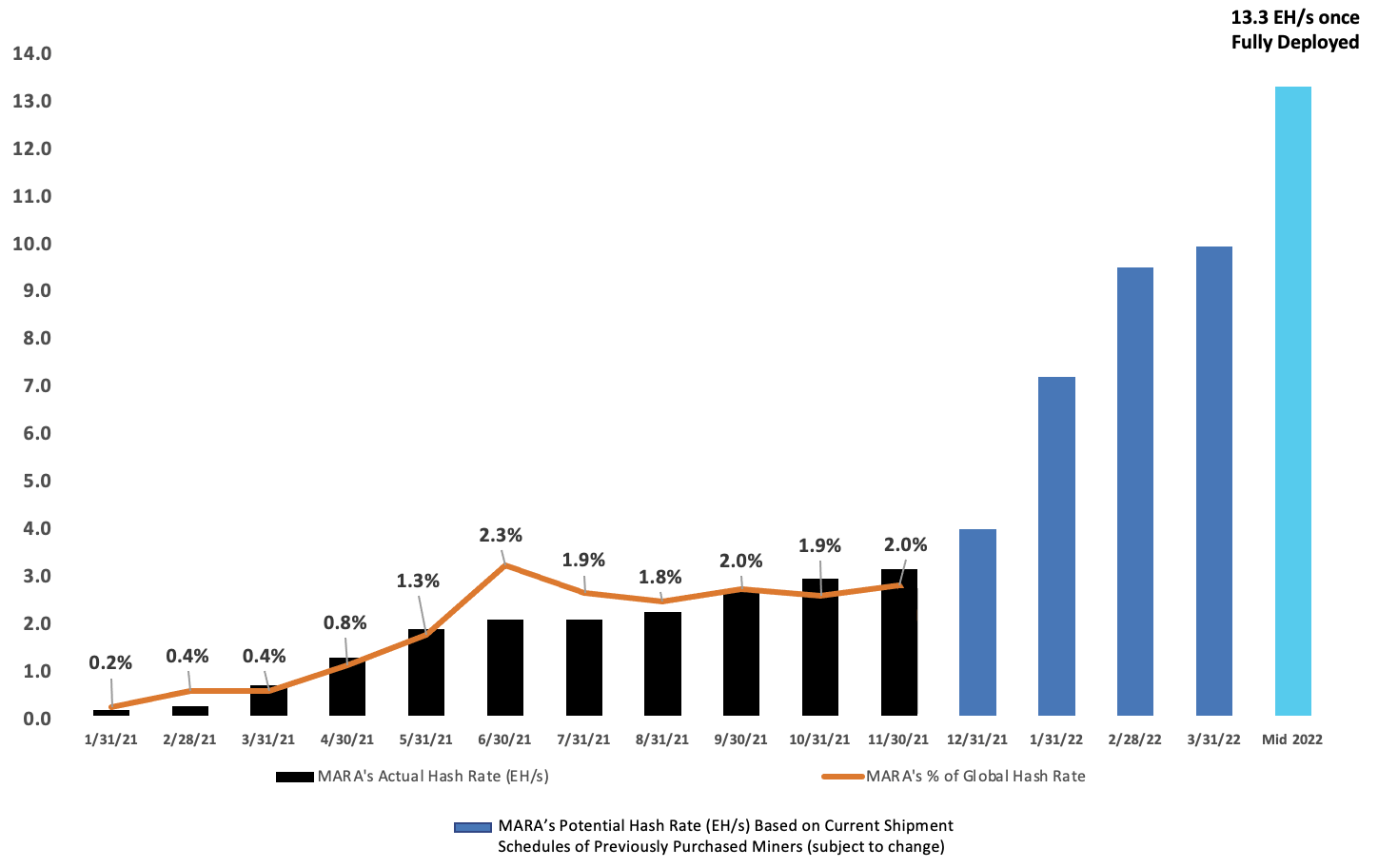 Corporate Highlights as of December 1, 2021

Bitcoin Production Update
As of December 1, 2021, Marathon’s mining fleet has produced approximately 2,712.3 self-mined bitcoin during 2021. By month, the Company’s bitcoin production was as follows:

In October, the Company began chartering planes to expedite shipments of miners and to mitigate the impact of global logistics issues on its growth trajectory. In November, the Company continued to charter planes, reducing the average time it takes to ship miners from approximately 21 days with commercial cargo to five days with chartered flights. As a result, Marathon received 15,520 miners in the month of November, and the Company has received approximately 56,826 miners year to date. While deliveries of miners may continue to fluctuate in the near-term, based on current estimates, the Company still anticipates all previously purchased miners to be delivered by mid-2022. Once all miners are fully installed, the Company’s mining fleet is expected to consist of approximately 133,000 miners, generating approximately 13.3 EH/s.

Management Commentary
“In November, we completed the buildout of our mining facility in Hardin, MT, we began deploying miners with Compute North, and we made substantial progress improving our ability to effectively scale our operations in the coming months,” said Fred Thiel, Marathon’s CEO. “After expanding our agreement with Compute North, we have secured reliable hosting with renewable power, at industry low rates for the remainder of our previously purchased miners. By continuing to charter planes, we have reduced the average time to ship miners from 21 days with commercial cargo to only five. We now have enough miners on the ground in the United States to utilize Compute North’s new capacity as it becomes available in the coming months. And after closing an oversubscribed convertible note offering, we increased our total liquidity to $1.1 billion, which provides us with optionality to improve our efficiency and further scale our operations.

“During the month, we performed several important upgrades to the power plant in Hardin, MT, including cleaning out nearly 400 tons of particulate matter that had been negatively impacting the plant’s ability to consistently generate power. While these upgrades caused our miners in Hardin to operate below capacity in November, which negatively impacted our bitcoin production for the month, we believe they were necessary in the near-term and will be beneficial in the long-run. With the plant and approximately 29,000 miners at Hardin back online, we produced approximately 34 bitcoin on December 1st alone.

“Today, Marathon is well-capitalized, our deployments are commencing with Compute North, and we have ample opportunities to continue expanding our mining operations with renewable power in the United States. As a result, we believe we are well positioned to reach 13.3 EH/s by mid 2022 and to remain agile and opportunistic as our industry evolves in the coming quarters.”

Investor Notice
Investing in our securities involves a high degree of risk. Before making an investment decision, you should carefully consider the risks, uncertainties and forward-looking statements described under "Risk Factors" in Item 1A of our most recent Annual Report on Form 10-K for the fiscal year ended December 31, 2020. If any of these risks were to occur, our business, financial condition or results of operations would likely suffer. In that event, the value of our securities could decline, and you could lose part or all of your investment. The risks and uncertainties we describe are not the only ones facing us. Additional risks not presently known to us or that we currently deem immaterial may also impair our business operations. In addition, our past financial performance may not be a reliable indicator of future performance, and historical trends should not be used to anticipate results in the future. Future changes in the network-wide mining difficulty rate or Bitcoin hash rate may also materially affect the future performance of Marathon's production of Bitcoin. Additionally, all discussions of financial metrics assume mining difficulty rates as of December 2021. The total network’s hash rate data is calculated from a third-party source, which is available here: https://www.blockchain.com/charts/hash-rate. Data from third-party sources has not been independently verified. See "Safe Harbor" below.

About Marathon Digital Holdings
Marathon is a digital asset technology company that mines cryptocurrencies with a focus on the blockchain ecosystem and the generation of digital assets.

Two figures accompanying this announcement are available at: